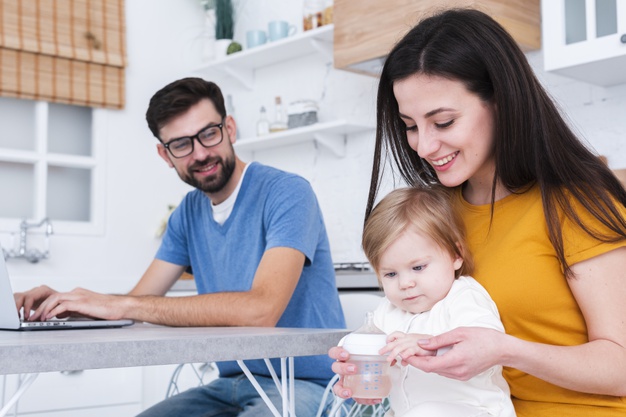 Definitely when children latch onto their bottle there is no way to make them to release it. This is the case of my son, 2 years old and he still loves it. He does not want to leave it by any means. I tried some methods but they did not work for him. Usually it is normal to hear people saying that if the use of the bottle in children is prolonged it may cause consequences on their teeth or affectations at mouth. This made me worry a little more.

These days talking to my grandmother she told me some funny anecdotes about breeding with my mother. She said that my mother loved her bottle so much that she would not let it even for a minute. She clung to it as if she never wanted to release it. It was at that time where I saw the perfect opportunity to ask her how she had done it. I do really needed to know it more if it was so har for her, surely it could work with my son too.

I have always been clear that breastfeeding generates emotional ties that allow the child to provoke a secure attachment, as well as the bottle that has a positive impact on their emotional development because it gives them security and tranquility, so it is not convenient to remove it from one day to the other, not under pressure.

My grandmother told me that the best was to understand the stages of our children, that we must awake the instinct to know what our little ones need from us. Surely, the prolonged attachment to the feeding bottle can be a sign of some emotional lack, of something that may be needed to leave it completely. If so, it is necessary to detect it and strengthen more the affective bonds like sharing more with them, talking to them more, helping them to be less dependent on us by giving them freedom in certain areas to work alone. I said well, I have worked a lot lately and the times to share with him although they are not few, they are also not the same as before. This definitely made me reflect about the importance of time quality and that the change was definitely able to generate consequences on the  attachment to his tete. I started there, I decided to spend more time for playing, affections and sharing together .However, not by leading him to overprotection, but on the contrary, I gave him the freedom to do things  by himself and teaching him to function more security. Seeing him more confident, I followed my grandmother’s number two advice.

My son used to take 3 feeding bottles a day, as soon as he got up it was the first thing I gave him. Something that my grandmother recommended me and that was definitely the beginning of the change, was to start by removing the morning bottle  gradually accustoming him to the moment that he sat at the table to have breakfast instead of his bottle, I would give him a cup of warm milk. I supported this process with motivational words such as “how about if you use a cup like mom?”, or also, how about if we drink in a nice cup together? ”, when my son asked me about his tete, I said that I would give it to him later, until he was used to it.

The following week, I tried to take another bottle from him, my little one loved to drink it after his lunch, but I replaced it again with a cup of warm milk. The last bottle I took from him was the one at night; but, I started this process the following week after taking his lunch bottle, also replacing it with a cup of warm milk at dinner time, following normal habits for sleep, like a rich bath, a story and sleep.

Although it was not easy at the beginning, these tips helped me a lot, accompanied by a good affective process, it allowed the child to detach more easily from his tete, without affecting him emotionally. On the contrary, he became much more self-confident.

Essential during postpartum and breastfeeding

HEALING OF CRACKS AND SORES ON THE NIPPLES